The OA, Westworld and Apprehending the Archetype of the Invisible 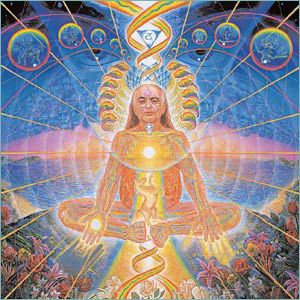 I watched an incredible new series last night called the OA.  I couldnt help without knowing anything about it that it might already be a syncy and personally relevant reference to the Omega and the Alpha. For anyone who has been following this blogs charting of the entrance into the Age of Aquarius and the Aeon of Maat, the significance of the OA/Omega Alpha lies in Maats connections to the Scales of Justice and the Last Judgement/Weighing of the Heart archetype, the beginning and the end, karma etc. I finishd the series in one day with the help of a chest cold. It was a great show with some talking points worth highlighting in the charting of the Maat mysteries that this blog has been doing. 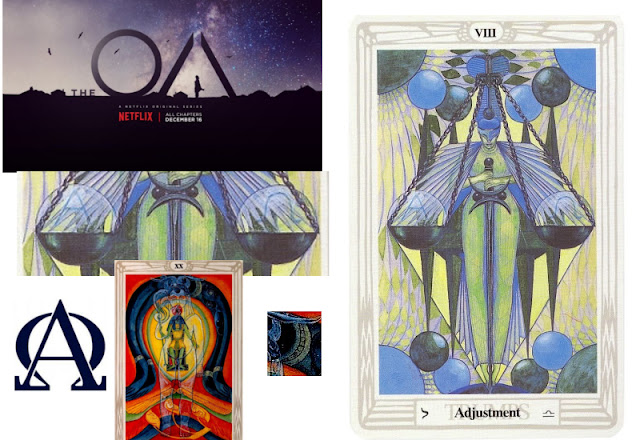 Right at the get go the OA begins to deal with the key elements of the Maat archetype, dealings with death, the afterlife, consciousness, morality and how events and people are connected through perceived meaning and destiny.  The show is basically about a woman who is abducted and experimented on because she has had near death experiences and her captor wants to exploit her and others for their access to other dimensions. The strangest thing about it is that I had a dream many years ago about a mad scientist who wanted to extract some substance from my consciousness that related to my own near death experience and personal mental struggles. I'll dig up the tweet/journal entry that I know it must be findable. I was also reminded of the same black school scientist in the film Beyond the Black Rainbow. My brief twitter synopsis was even retweeted by the director but getting back on track... this show is entraining with alot of personal themes.

"Thou art ASAR UN-NEFER ("Myself made Perfect"): Whom no man hath seen at any time."
- Aleister Crowley on the Holy Guardian Angel in Liber Samech

There is a great theme in the film where entering this transcendent afterlife astral duat realm that faetures what I think is a beautiful incarnation of Nuit/Maat. 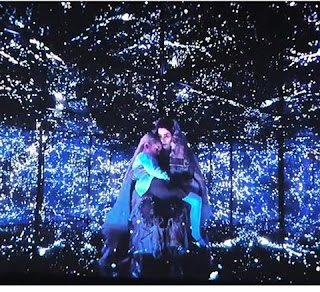 In these scenes we see our main character biologically dead but encountering a starry initiatory goddess that grants access back from this astral plane and into her body.

The film bears many interesting gnostic themes that pertain to personal willpower and salvation from captivity but also just for instance how the main character basically gathers 5 Apostles all of whom eventually must work together in a ceremonial dramatic ritual  called "Movements" with their own part to play so that an interdimensional portal could be opened. I couldnt help but think of the importance of 5 in terms of Magick ritual movements where one works with the four earthly elements so that they might  invoke and come to contact with that 5th Quintessential transcendent element of Consciousness. The whole theme of the show is that Consciousness is Liberation.  There are heavy themes of cpativity and imprisonment on physical and psychological  or spiritual levels and so we see very fascinating gnostic themes of personal salvation arise. Amazingly the show concludes with the 5th and final Movmenet* aka New Gnosis aka Magick, being discovered only through the unified magick of the group dance ritual, and that is our key to getting out of this old age of Pisces and into Aquarius, the sign of community. We are exiting the individual era and movement into identification with consciousness and not just the human body. The OA and shows like Westworld demonstrate our initiation into this knowledge perfectly.

My Film a Thin Skin or Membrane series has been charting the course of these Maat/Astral/Afterlife mysteries and synchronicities, I reccomend seeing all 3 parts to understand why I feel the OA and these gathered medias all feel like a powerful projection of psychic content that we can tap into a live sense of understanding history, that we might help all find a greater holism and meaning in our personal and collective awareness. 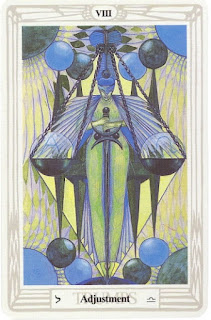 The collective willpower element brought to mind a recent revelation that hast been stirring in how and why Life the Universe and Everything always seems to come back to 42 and personally for me the relationship there to Maat and her 42 principles/the duat.  Realizing that Maat was the ancient egyptian symbol for collective civic consciousness. Egypt was even divided into 42 parts in honor of this original goddess of equality and justice in community. So what we see is Maat/42 as an early apprehension of the collective state of being. This would also reflect and develope the Hebrew concept of the Shekinah which was also the Goddess/Feminine expression of divintiy just like Maat. Shekinah means Glory and referred to a special kind of Grace, Energy, and Power that could supposedly even be seen  in the form of a great pillar of light when Israel was united in Spiritual harmony. This all connects amazingly to the personal pillar of light that is each of our spines known as the Rainbow Bridge or Antahkarana. Amazingly the Shekinah is also even quoted in Crowleys chapter on the Maat/Libra/Adjustment tarot card Adjustment.

"This woman-goddess is Harlequin; she is the partner and fulfillment of The Fool. She is the ultimate illusion which is manifestation; she is the dance, many-coloured, many-wiled, of Life itself. Constantly whirling, all possibilities are enjoyed, under the phantom show of Space and Time: all things are real, the soul is the surface, precisely because they are instantly compensated by this Adjustment. All things are harmony and beauty; all things are Truth: because they cancel out.


She is the goddess Maat; she bears upon her nemyss the ostrich feathers of the Twofold Truth."

So interestingly again we are reminded that the Fool or Aleph is the partner of the Harlequinn Maat who is Lamed, we have AL the two key elements of Liber AL vel legis.  Maat rules over law and order so we see her doubly invoked in Liber AL and the word Legis or Law as well. The fool representing the male force of creation and Maat or adjustment representing the goddess that births that creation into many colored form. 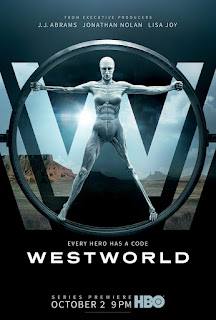 To continue referring to how media is highlighting our initiation into this Aeon of Horus/Maat and Aquarius I would also like to mention how the show Westworld also had dramatic Thelemic themes in it as well.  Lets think about the name Westworld and how it relates also to the astral plane as the West is the direction where the Sun Sets/dies and goes into the underworld where Maat resides. So in a sense we see people going into this kind of astral double of the world and looking at consciousness as this self arising force that uses matter to manifest itself.  The impersonal thus collective or tribal nature of awareness or consciousness is highlighted powerfully and relates us back to the Maatian mysteries current moving through media. Consciousness is our transcendent salvation and we can only know this by our own journies into our own Westworlds and release ourself from our own mental captivity through listening to our deepest will and manifesting it.

"Arnold: When I was first working on your mind, there was a pyramid I thought you needed to scale, so I gave you a voice, my voice to guide you along the way. Memory, improvisation, each step in order to reach the next step, but you never got there. I couldn't understand what was holding you back. Then, one day, I realized I'd made a mistake. Consciousness isn't a journey upward, but a journey inward, not a pyramid, but a maze. Every choice will bring you closer to center of send you spiraling to the edges, to madness. Do you understand now, Dolores, what the center represents? Whose voice I've been wanting you to hear?"

Consider the powerful connection here to the Holy Guardian Angel or ones personal Genius or Daemon, that which brings us direct communication from our deepest purest self. This silent center, this teacher whos speech is in silence, is what the initiates of Thelemic mysticism must forge their own contact with as one manifests their joy and their will in this reality.  It seems as though Westworld is continuing the perfect reflection of the Gnostic themes of personal Salvation through knowledge and conversation with the Heart / Tiphareth / Christ Savior.

"The Holy Guardian Angel is representative of one’s truest divine nature. The term is equivalent with the Genius of the Golden Dawn, the Augoeides of Iamblichus, the Atman of Hinduism, and the Daemon of the gnostics.

It should never be forgotten for a single moment that the central and essential work of the Magician is the attainment of the Knowledge and Conversation of the Holy Guardian Angel. Once he has achieved this he must of course be left entirely in the hands of that Angel, who can be invariably and inevitably relied upon to lead him to the further great step—crossing of the Abyss and the attainment of the grade of Master of the Temple. (Magick Without Tears, Ch.83)"


"Let the woman be girt with a sword before me:" - Liber AL Vel Legis reintroducing the goddess/feminine current via the return of the great mother/whore BABALON

As I have explored in past posts on this blog about how the Aquarian Age that we are entering ( who's first decan is Libra aka Maat) we have explored that this age would unify the binaries of our society, androgyny would become more pronounced and the rigid black and white perspective of the past would give way to a greater transcendent understanding of reality and the human being. The return of the feminine energy after the age of imposed patriarchal male power is highlighted by not only Hilary Clintons running this year but many films and television shows that have been highlighting the feminine as well. In the world of magick and mysticism we understand that after the imbalanced patriarchal age of christianity that we are presently returning to alignment with the repressed goddess/feminine and thus our culture and psyche produce the signs and forms that communicate this return to psychic unity in our culture.


Thats all for now, more thoughs to come, much love.

In the Netflix show "The OA", Prarie refers to herself as the OA which is intended to mystify the viewer and get them ready for season 2. "OA" is definitely a spiritual reference and is a twisting of the Lord Jesus saying four times in the Revelation, "I am the Alpha and Omega". The writer of The OA makes Prarie a Christ archetype, but the desire is to make her the end of the current state of the world and the beginning of a new world which uses special interpretive dance moves to unlock the secrets of the universe. For reference, read Revelation 1:8, 1:11, 21:6, and 22:13.

Not to master but to shine light. 87 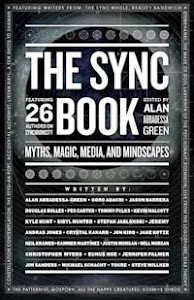 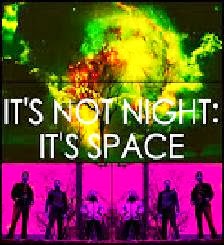